This season I’m driving the JRM Racing Honda Performance Development ARX-03 in the LMP1 class prototypes in the FIA World Endurance Championship. Teaming up with seasoned campaigners David Brabham and Peter Dumbreck, the racing would take in the 24 hours of Le Mans. Peter and David had 23 Le Mans starts between them, this was to be my first one.

People had told me stories about the race, I’d read lots of stuff about it on the web and whilst you listen and take them in, nothing really prepares you for just how fantastic the whole experience is. Even in the build up, I kept thinking that I really don’t get what all the big fuss is about. It’s not until the Saturday and Sunday of the race that you appreciate just what a magical event it is and having now completed my first 24 hours, I just want to go back again and again.

It’s just so special, but also very draining as it is incredibly tough physically and even more mentally. I did the graveyard shift from 2am to 5am. When you go from Mulsanne corner to Indianapolis, the road has some big bumps in it but you are doing 200mph. It’s just a fantastic feeling. Approaching Indianapolis in the dark, surrounded by trees, with mist and fog hanging in the air , it is the most surreal experience I’ve had in my life. Even at 3am you are driving at 10 tenths, the race is so competitive. The car was even running on the qualifying engine map for some 19 or so hours, it is just flat out from the moment the green flag appears.

One stand out moment in the race and probably the funniest moment of my career was when I was approaching Indianapolis in the dark at around 3:30am. I could see a cloud of thick smoke drifting across the track and I assumed a car must have gone off. Strangely there were no yellow flags from the marshals. I thought to myself how strange, why no flags? I went through the corner and into the smoke and all of a sudden the cockpit filled with a very familiar smell……..BURGERS! There was me expecting a car to have blown an engine, worrying about the chance of oil on the track when actually it was the spectators having a big barbecue!!!

We finished 6th overall, though I like to think we were second in class as the 4 Audi LMP1’s are just so far ahead of everyone else.

Once the race finished, I asked Peter and David what their plans were and if we should go to celebrate. They only had one plan, which was to jump straight into their cars and drive back to England, which I just couldn’t believe! Whilst they faced a journey lasting till 4 am, I went into the town of Le Mans with my family and friends and enjoyed a lovely meal followed by 10 hours of much needed sleep.

Having experienced one 24 hour race, I can’t wait to return to Le Mans many, many times more 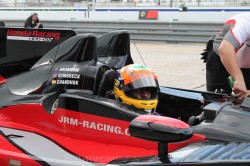