Motorsport didn’t feature in my life until my teens, the reason for that was I didn’t really have any understanding of it. None of my friends or family were involved in motorsport beforehand. The reason I started on two wheels was we lived in a rural area and there were plenty of fields where you could ride motorbikes.

My father bought and sold cars and it was only through some of his contacts that we really discovered there was a world of motorsport outside of Formula One, that was all we saw on TV & just didn’t appreciate what else was out there. As a young lad I used to love watching Ronnie Peterson in the JPS Lotus. The year I changed from two wheels to four was the same year Ayrton Senna began his career. I can honestly say I never thought I would find myself sat on the same grid as Senna.

90% of the guys involved in circuit racing have made the progression from racing karts, that wasn’t the background I came from. I got into the top 36 ACU national rider in schoolboy motocross and had the chance to pursue a professional career, but felt at that stage it was time to look at doing something different as I was fed up with getting covered in mud! Damon Hill and John Surtees started out on two wheels, all be it road racing, so it is not out of the question that you can start the journey to F1 from different backgrounds and disciplines.

It was at this point we went out to find out what might be possible. We went to a motor racing show at I think Alexandra Palace, rather than the N.E.C as it would be now. We went along and bumped into a local manufacturer that was based twenty minutes down the road from us called Lola sports cars. We understood we had to start off single seater racing at the entry level in a 1600 Formula Ford.

The first time I went out on track was 1984 at Cadwell Park in a Lola via Cadwell’s racing school that existed back then. I had a day there and then later returned with my own car for a day with an instructor. Cadwell was a great circuit to start my career at, it’s a great shame it isn’t used more.

My first ever competitive race was at Silverstone in 1984 in a sports libre race. I was in my Lola Formula Ford up against Formula 5000 cars and all sorts of other stuff as it was an open race. It was wet and we were up against some much more powerful machinery, I think we managed a couple of top ten finishes. My next race was at Brands Hatch in a Formula Ford race and again finished 10th but that was the start of competing in around seventy five Formula Ford races, of which I won twenty five, taking twenty odd poles and a similar number of fastest laps. It was a good year.

My move into F1 came about just five years after starting out in Formula Ford, after competing in World Sports Cars and F3000 I was presented to Frank Williams and was vying to get some test mileage with the team. It is standard nowadays to have test drivers but back then it was all new and I was to become one of the first test and development drivers in F1.

Getting behind the wheel of an F1 car for the first time, it wasn’t necessarily the power that was impressive as I think you gradually build that up as you step up the ladder in motorsport. It was the stopping power, cornering speeds and directness that truly impressed. The real buzz you get as a driver is when you feel almost as one with the car and an F1 car can certainly give you that.

The first time I sat on the grid was at Phoenix, Arizona in 1991, a place I went back to several years later to live when I became an IndyCar driver. Safe to say it was an interesting time. I’d been test driver with a World Championship winning team, Williams, before moving to Brabham who were chronically under-funded and way down the pecking order. We turned up with a car that only had four gears when it should have had six and I really wondered what kind of mistake I’d made. Damon Hill took my place at Williams, sometimes you just never know which way the cookie crumbles…

One stand out memory though was securing my first World Championship point in the Brabham Yamaha at Spa-Francorchamps. I got to race 61 Grand Prix and secured three podiums where I stood alongside World Champions including Michael Schumacher, Ayrton Senna and Alain Prost. I’ve some great memories of my time in F1 and plenty of tales I’ll be able to tell the grand kids. Of the circuits I raced, my favourites had to be Spa, Silverstone was obviously special for being my home grand prix and then Monza has to be on that list, there is nothing like going to an Italian Grand Prix. Le Mans is unique, also circuits like Leguna Seca in the States that are just phenomenal circuits.

Apart from nearly wiping myself out in Brazil at 200mph due to brake failure, IndyCar had many good memories. It has a mix of street circuits, road courses and ovals. Winning a 500 mile oval race was a big achievement, at the time I won I was only the fourth British driver to secure a victory over there – joining Nigel Mansell, Graham Hill and Jim Clark. Further victories followed for the Brits later on with Dan Wheldon and Dario Franchitti enjoying success in Indycars.

Le Mans is somewhat daunting to drive, because some of the circuit is made up of national roads, the camber is designed for road cars and bad weather, so the first time you hit the Mulsanne Straight and find yourself tracking across the road at over 200mph because of the camber, it can be somewhat alarming with little downforce on the car. Driving in the pitch black with lots of traffic certainly catches your attention and takes some getting used to. It takes some getting used to but every lap of Le Mans is a memory.

When we won in 1992, standing on the podium after 24 hours of racing, it was a mixture of so many emotions, it as exhilarating, emotionally draining but at the same time so rewarding. Did we celebrate afterwards? No we jumped straight into our hire cars and drove on pure adrenalin for three hours to catch our flights home! We did have a big celebration a couple of weeks later though! 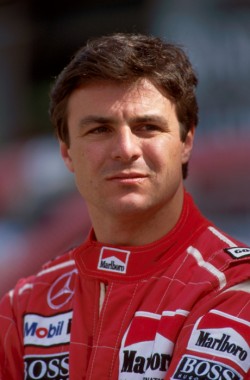