To understand this story a bit of background detail is required. Firstly I wasn’t going to race in the 2010 Ginetta Junior Winter Series until the very last minute due to finances. Secondly I had a few main competitors at the race, one was David Moore who had a good season in the main championship and was probably the favorite to win. The second was Seb Morris who had a lot of practice at the Pembrey circuit in South Wales.

The decision to race was made on the Thursday before the race meeting. I had already set off to Ginetta to get a lift down to go and watch the meeting with one of my friends. By the time I got to Ginetta we had the sponsorship in place to race. I went to the circuit with Ginetta in-case everything didn’t come to fruition. My Dad and Brother were going to pack the truck and then Dad would set off to the circuit late that night ready for the Friday testing.

He set off and all was well, for two miles at least. The truck lights broke when he went over a bump. He got to a service station then got escorted home by the police. He finished that night at 4am after trying to fix the truck. He then went to bed and got up to try and fix the problem. He eventually set off to do a night drive and arrived just after midnight on Friday. As a result I missed the whole test day.

We woke up on Saturday morning and got the car out of the truck. Our pre-qualifying preparations included removing the passenger seat that had been used for my Brother and taking out the boxes we use in transit. We also got the all the tire pressures the same but guessed on pressure. Everything else was left until after, no set-up changes were made from the last time it turned a wheel. My first lap around the Pembrey circuit was in that qualifying session. It was damp, I qualified 7th on the grid which I was happy with. I felt like I could go quicker but just needed more time.

I made a good start in the first race and moved up to about 5th place. I fought through to finish in 3rd place and took my first ever Ginetta Junior podium. Seb won the race from David, by the end of the race I was running the same pace as they were. I then made a good start in race two and found myself in 3rd place behind Seb and David. Seb made a mistake and spun; he kept going but was at the back. David was a few seconds down the road with 5 laps to go. I knew that to win I just had to push and I began closing him down. I caught him with 2 laps to go and made a switch back move work at the first corner. I then ran wide at turn 4 and he got back through. I increased the pressure on him throughout the lap, he out braked himself at the first corner. He ran on and I was assured of victory if I didn’t make any mistakes. Turn 4 caught me out as well; I ran wide and kicked up the dirt having a big slide. I crossed the line about two seconds ahead and was second in the championship after the first day of racing. Not bad considering I had never driven the circuit before Qualifying.

The second day held a qualifying session and two races again. I qualified in 5th position this time, a bit better than the previous day. I was still miles behind the others in terms of track time because of missing the Friday test. The first race was very wet; Adam Bonham took the win from Seb and then myself. We were all about the same pace, I just couldn’t find a way past Seb and likewise we both couldn’t quite pass Adam.

Going into the last round of the championship I was leading. However, if Seb beat me he would win and if I beat Seb I would win. David Moore could still have won the championship but needed to beat us both with a few cars in-between. I started 5th again and made a terrible start. I made my way through the pack and was eventually behind Adam Bonham in 3rd place with Seb out front. I got past Adam and at the next corner he had a tangle with another car and hit the pit wall. Safety car! Just what I needed, I was right on the back of Seb and had three laps to become champion when the safety car lights went out. I got myself psyched up for the restart and was about 2 car lengths off Seb on braking into the first corner. Then everything went in slow motion, I saw David hurtling up the inside of me, he tapped me on the back panel and I spun. Race over, championship over! Everyone came past, I shot off after the pack as fast as I could, I overtook two cars in one corner but touched one of them and spun again. The race got red-flagged and I was given 2nd place back, however I didn’t win the championship.

Although I didn’t win I came very close and I had it within my grasp, it was a weekend for the underdog, it nearly all happened. The reason I picked this from my large collection of races was because of the story involved, just being there and racing was an emotional rollercoaster but to have taken my first podium and win in car racing on an unknown track against good drivers was fantastic. I also learnt a lot from the weekend, more than many others in my career.

Max on the top step of the podium 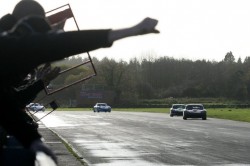 Crossing the line for victory 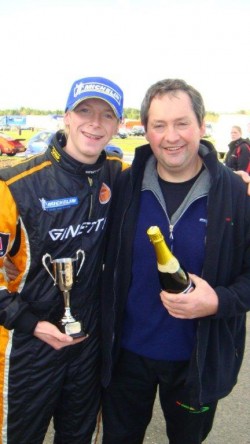 Winners!
Add your own memory
View more memories about Other Races