The first time I drove a racing car

I have a fairly hazy memory of going to a place where they’d put the road down but not started building yet to drive a car. I can certainly remember enjoying the balance and feel of it.

My fondest memory of Silverstone was in 1950 when the King and Queen came to the circuit and I met them, which to a young kid was pretty meaningful.

I think my most important race ever was in Monaco in 1961, that or my victory in the Mille Miglia. What makes Monaco so special is that you can see the people, you can spot all the pretty girls on the side and blow them kisses. We used to race for something like three and a quarter hours, not like today’s hour and a half. The race was one hundred laps. It is such a demanding circuit but such a rewarding one if you get it right.

The Mille Miglia was the only race I was ever frightened of. Until the flag fell I was scared, because I didn’t know the circuit. It was a thousand miles, so you just couldn’t learn the circuit. It took a day to do 500 miles in practice, which lasted two days, so you just didn’t have the knowledge of the circuit, but I did have a brilliant navigator travelling with me (Denis Jenkinson) giving me hand signals as to where the road went next.

I think the 250F Maserati is probably the nicest of all the front engine formula one cars, it really is a beautiful car and I can’t think of anything better to drive round here

Sir Stirling was interviewed at the Silverstone Classic 2014 prior to driving the Maserati 250F in the parade to celebrate fifty years of Formula One at the circuit and to honour the life of Sir Jack Brabham. Watch the parade below 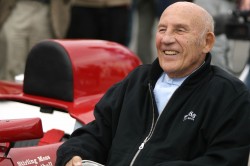 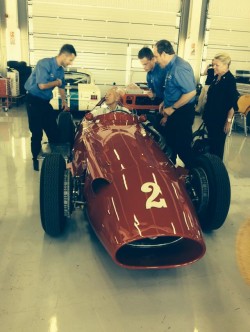 Sir Stirling trying out the Maserati 250F prior to the parade 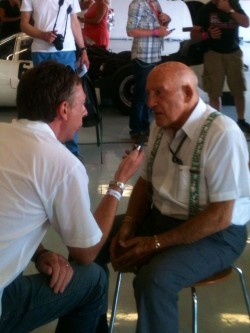