The 24 hours of Le Mans is without doubt one of the most famous races in the world; attracting manufacturers and top privateer teams alike, so I always feel privileged to be a part of it.

This year in particular was doubly special, as not only was I driving for the Risi/Acemco team, re-joining many of the guys with whom I’d finished 2nd overall in the Rolex Daytona 24 this year, but I was back in a Ferrari.

I’ve driven at Le Mans before in a Porsche and for Saleen, but there is something about the name; Ferrari, that grabs people’s attention!

The week prior to the race always seems to go on forever. When we finally did get out on track on Wednesday night, things initially weren’t great, as we struggled to find a set up that was going to be driveable for 24 hours. Personally, things got a bit worse at the end as well, because I had one of my crash helmets stolen from the back of the pit garage. All that tight security controlling the pit garages obviously didn’t work, as I can’t believe anyone with a legitimate pass to be there would bother stealing a crash helmet, let alone the sweaty balaclava on top of it!

Thursday night qualifying went better…… eventually! We lost a lot of time with some pretty major issues, but the team worked fantastically hard to get me out for the last 30 minutes of the night session. Yokohama didn’t bring any qualifiers as such, but they gave me a set of night tyres and the car balance was pretty good, allowing us to get amongst the front running GT cars. Qualifying at Le Mans is not actually that important in terms of the race result, but it is always nice for the team, (and the driver!), if you can get yourself a decent starting position.

On race morning, it chucked it down with rain, but fortunately the weather soon cleared, and it had done nothing to dampen the spirits of the large British crowd. As ever they were incredibly loud and enthusiastic, and it was great to see my own personal support club in the main grandstand, banners and all! Thanks guys!

Shane Lewis started the race and did a great job in hot conditions to keep us in touch. We all started off by doing double driving stints, but we didn’t initially double stint the tyres until my second stint, which meant that I ended up doing a triple, which in a GT car equates to around 3 and a half hours driving! It didn’t seem that long, because I’d got into a good groove on the track and the car and tyres were holding up well, so it certainly didn’t feel I’d driven well over a normal ALMS or FIA race distance!

The Ferrari was running like clockwork, the only real close shave I had was when the slower Racing for Holland Dome decided to stick me into the pitlane as we approached the first of the Ford chicanes. I then had 2 choices; either drive down the whole pitlane at 60kph, and lose around 20 or 30 seconds, or turn sharp left out of the pitlane and over the gravel, and hopefully only lose a couple of seconds. I went for the latter, and fortunately made it through the gravel trap, otherwise I’d have looked a bit silly!

When I handed over to Butch Leitzinger we were in 3rd place in GT, and both he and Shane did great double stints to keep us right up there. In fact, just before I got in again at around 1am, the Alex Job/Petersen Porsche pitted to change a radiator, putting Shane up to 2nd, and then just as I left pitlane the Taisan Porsche had a lengthy pit stop as well. This meant that the 2nd time I went past the pits, I had P1 on my board, which was rather nice!

Unfortunately it was all too short lived. About 4 laps later, with nearly a lap lead, I suddenly felt a big vibration exiting Tertre Rouge, followed by a large bang. We’re still not exactly sure what let go, but it was obviously a terminal engine failure.

The French marshals were all great, offering me cheese and bread and wine, all of which they’d obviously consumed themselves in copious amounts! That still didn’t ease that horrible sinking feeling of what might have been. I know we couldn’t have kept the AJR/Petersen car behind us for another 13 hours, and I was genuinely pleased for Mike, Dale, Alex and the guys that they won, but I wish we could have made them work a bit harder to retake the lead!

Everyone at the Risi/Acemco team deserved better, and it was unfortunate that both cars had problems, although the team did a sterling job to get the #94 Calpont Ferrari to the finish after losing the best part of 4 hours in the pits early on. I know how hard it is to stay motivated when that kind of thing happens, but Ralf, Anthony and Terry and the whole team kept at it to make the finish which is an achievement in itself.

Everyone from Guiseppe Risi and Jeff Giangrande down should be proud, they qualified 1st and 2nd Ferrari, led GT with one car, and made the finish with the other.

Ok, it could have been a double podium, but then that’s Le Mans!

Johnny is a supporter of the Sporting Memories Network 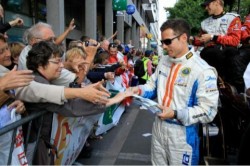