Tom Webb: my introduction to powerful cars and to racing

My Dad, Ian Webb. He was a motoring journalist, raced a bit when he younger, bought and sold sportscars, owned a Ferrari dealership in Surrey, owned and raced Can-Am cars and was an all-round petrol head. My earliest memory is going to pick up a babysitter one night in his Ferrari 275GTB4, standing on his lap and holding the steering wheel while he drove. Obviously highly illegal, seriously dangerous and not recommended, but a very cool introduction to the world of horsepower.

For me, the purest form of racing has always been Can Am and 60s Le Mans cars first, then F1. The ultimate car, in my opinion, is a McLaren M8F. It looks amazing, sounds like God’s ripping up the sky and (I’m told by my Dad) it’s a monster to drive.

Another early memory is hanging out with a guy called David Piper who my Dad used to race with. David was a driver in the Steve McQueen le Mans film and, amongst other things, is famous for having an accident in that film that ended up badly and saw him being carted off to hospital, finally leaving minus a foot. Despite that, David had a Ferrari P4, a Porsche 917 and various other Le Mans legends, and those sorts of cars are what racing should be.

F1 is a very close second to monster motors of the past. It’s now my job and I’m extremely lucky to work in something I’m passionate about.

I went all over the UK with my Dad when he was racing, and abroad with mates – to Le Mans, Spa, Imola – all over, mainly to watch friends race.

As for my own ambitions, what little boy doesn’t want to race cars? Of course I did! Now I work in motorsport. I’m not participating but what I do now is the next best thing.

I first drove at a track day at Brands Hatch with my Dad. It was a Formula Vauxhall Lotus, a little thing with basic wings and slick tyres and I had about 30 laps just whizzing around. It was brilliant.

But I’ve also been lucky enough to be driven by some very talented people on track. Martin Colvill (of Bell & Colvill in Surrey for the serious metalheads out there) drove me around Ford’s old test track at Boreham Wood in Essex in his Ford GT40, a real Le Mans winning car. And Heikki Kovalainen thrashed a Lotus Evora with me in the passenger seat around a very icy Stowe circuit at Silverstone in 2010. That was seriously memorable.

More recently, Jarno Trulli gave me a masterclass in car control around the Nurburgring GP track in a hotted up Renault Megane, sliding it everywhere and laughing manically as he high-fived me after one corner (which for anyone who knows Jarno knows is an extremely rare thing for him to do!)

Being out on track is violent escapist control! That’s about the best way I can describe it. You’re escaping the real world in a controlled environment that just happens to be extremely violent. It’s amazing. 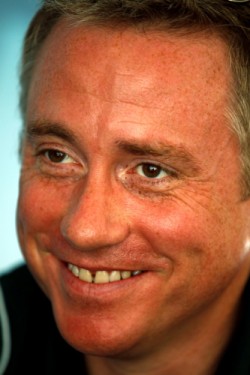