My father Mike Couper was racing cars at Brooklands in the late twenties and early thirties as well as motorbikes at the Isle of Man TT. He drove Lagondas and a special Talbot as part of the Talbot team with Sir Henry ‘Tim’ Birkin. He also ran a major motor distributorship and formed a partnership at one point with Tim Birkin as ‘Birkin & Couper’ Ltd which manufactured the legendary 'Blower' Bentley supercharged 4½-liter racing and road cars in Welwyn.

He finished driving at Brooklands in 1938 but drove in the Monte Carlo Rally just before the war in 1939 in a Sunbeam-Talbot company’s Hillman Minx. In the war he served in the army and was in the Royal Army Service corps where he taught men to ride motorbikes. He was also a committee member of the AA and the BRDC, and was involved in assessing and the eventual purchase of Silverstone after the war.

After the war he drove to Monte Carlo in 1947 with Motor’s sports editor Walkerley, but his great friend whom he often drove the Monte with was Leslie Seyd, a well-known wine shipper who was at school with my Father at Repton. He drove with Leslie in ’39,’49, ’50, and ’54, and always in a Rolls or a Bentley. (See their 1950 Rolls in the video)

In 1952 my father drove in the Monte with my then fiancé, Patrick Fillingham for the first time. As I was married in the spring of 1952, my Father I think rather jokingly said to Pat in the previous autumn, ‘if you come along and we win the Concord D’Elegance you can marry my daughter a month early’ and that was the deal. They won and we did get married a month early.

In 1953 they drove together again, this time in the Green Bentley Registration 'PLG 728’ (see photo). It lived at home with us for quite a long time before hand. Mechanics worked on it in my Father’s garage to prepare it for the Rally. They had a device under the bonnet so that they could warm a can of soup. They had extending fog lights that came out on some kind of an arm and odd little gadgets like that. The car had the 4 ½-liter engine and a large luggage trunk. The equipment it carried included two spare wheels fitted with snow tyres, two hydraulic jacks fitted to boards to prevent them sinking into snow, a nylon tow rope, two compressed air bottles, thermos flasks and a stop-watch board.

In my Father’s book, ‘Rallying to Monte Carlo’, he wrote, "I came into possession of PLG 728, a very nice example finished in dark olive green with grey upholstery” and the car's special preparation included "the cylinder heads and ports polished to a beautiful mirror-like finish" The car was timed at nine seconds 0-50mph, 18.5secs 0-75mph and its top speed was checked at 102mph.

They started the 1953 Monte Carlo Rally, as they nearly always did, from Blythswood Square in Glasgow. At Llandrindod in Wales, he continues in his book, "we had an excellent dinner at 'The Commodore'" before continuing via London to Dover and the cross-Channel ferry. Once in France lunch was taken in the Count of Luxembourg Hotel at St Omer before charging on through ever-denser fog into Belgium, then Holland. The Hotel Gallia in Brussels allowed refreshment, then back on icy, fog-bound roads to Paris, France.

A mere 'Rally dinner' was taken in the Hotel Berry at Bourges, and then 'PLG' was into snow over the Massif Central hills. Digne, Grasse and Monte Carlo followed. It had been a comparatively easy Monte and 253 competitors remained unpenalized. The Regularity Test then took victims, 93 being penalized and four disqualified. An acceleration and braking test on the Monaco seafront then preceded a timed test on the Col de Braus mountain pass. Sadly the crew’s timing was out and they were placed 45th. In the Concours de Confort the car – valeted by the Monte Carlo Rolls-Royce dealership, won its class yet again – but missed out on the Grand Prix. The organizers, however, considered my Father’s contribution to the event to have been so great, over so many years, they awarded him and 'PLG' here a special Coupe d'Or (Gold Cup) instead. His expenses, "excluding tyres, work on the car and various small bits and pieces came out as....£277 2s 8d."

As a girl growing up I didn’t get to see Father racing and I was kept behind a green baize door and only heard all the stories later. I didn’t actually get to Monte Carlo until 1955. There were four of us who drove down together from London. The atmosphere in Monte Carlo was amazing. You came from a very cold, grey Britain and arrived in this wonderful, warm and sunny place. One couldn’t get over the colours and I particularly remember all the beautiful cyclamen around the Casino. The weather was balmy and everyone was pleased to see you. We stayed in the Metropole; a very grand hotel. The food was wonderful, the weather was wonderful and the parties were even better. It was a very good long weekend of hedonism. Most of the cars were still there. They would line them all up along the sea front just below the Casino and all the Monegasques would all come out to admire the cars and say hello to everybody; it was all incredibly friendly.

It is very interesting for me read this story about Mike Couper since I own the Lagonda in which he won a Glacier cup in 1932. It is great to hear from his daughter about his driving and racing stories. Christian 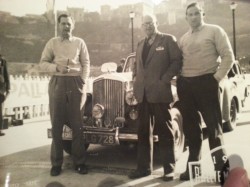