I was fortunate to be involved in motor racing during the Golden Era of the sixties and seventies. During that time as a Director of Brabham Racing Organisation and McLaren Racing there were many great experiences and times of triumph and tragedy.

A fond memory from when I was with the Brabham F1 Team, played out at the French Grand Prix held on the Reims circuit in 1966. We had two Repco Brabhams driven by Jack Brabham and Denny Hulme in what turned out to be an eventful race. The pits were situated on a long straight with a separate area for holding out pit signals at the exit of Thillois hairpin at the beginning of the straight. After a race long battle with Ferrari, Jack finally prevailed, to become the first driver in history to win a Grand Prix in a car of his own manufacture. It was monumental, with Denny finishing third and as Jack rounded the hairpin on the slowing down lap, he stopped at the signalling box and I was able to run over to the car and hug his helmet in congratulations. The smile on Jack's face was priceless, a very special moment and Jack went on to win his third Driver's World Championship.

In a similar vein at Spa in 1968 for the Belgian Grand Prix with McLaren Racing we knew from experience that this very fast circuit had a history of cars running out of fuel. This happened again and with a lap to go, Jackie Stewart led and Bruce McLaren had worked his way up to second in the McLaren Ford M7A. As the leaders rounded the final hairpin, Stewart failed to appear and the chequered flag went out. Bruce returned to the pits still thinking he had finished second and wondering why we were all so excited. He didn't hear the shouts of "you've won" and when he finally stopped, it dawned on him and he, like Jack before him, had won a Grand Prix in a car built by McLaren and bearing his name. Bruce was overjoyed and this victory was a just reward for him and the McLaren Team.

For more information on Phil's career and his superb autobiography 'To finish first - My years inside Formula One, Can-Am and Indy 500' visit www.mclarenmotorsport.co.nz

Enjoyed this memory? Add your own memories and help support older people with dementia and depression 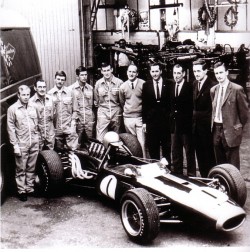 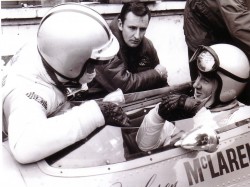