When I was growing up, Damon Hill was World Champion, my family have always raced historic cars and so I also watched a lot of older footage, seeing the likes of James Hunt and Alan Jones. That era was filled with characters and really was an iconic time of racing. The nature of the sport has made it all a far more serious business today and you have to devote so much time to training. James Hunt was certainly one of my heroes, as was Jody Scheckter and I was fortunate to drive a similar Merlin Mk11A to the one he raced. Talking about heroes, Ayrton Senna transformed the sport.

I’ve always loved historics. Modern sports cars, with all their technology, they are phenomenally quick, but driving the old Formula 1 cars, that have actually won Grand Prix, they are almost alive. The story behind the cars is always fascinating and one of my favourites is a Hesketh 308e which is an ex-Rupert Keegan car. The car was sponsored by Penthouse and Rizzla, the livery is just fantastic.

I was lucky enough to race the Hesketh at Monaco in 2012. At first the whole experience was just bizarre. In free practice the circuit was really greasy, it felt like I was driving something with 500 bhp around a car park! You couldn’t grab the gears quick enough, you’re racing around but trying to find some space, there were 40 cars on track, which round Monaco is somewhat of a challenge in itself, but as I settled into it, it was a case of building up trust and feel. You had to know where the limit was, you had to build speed gradually, I don’t think you can just go out there and nail it in one lap at Monaco. When a good lap comes together, brushing the arnco round Rascasse, it just feels spectacular.

I started the race from pole, which was fantastic, but lots of pressure. Ten minutes before the race it chucked it down and so I basically spent the next 45 minutes trying not to crash! It was the scariest but most fun thing I’ve done for quite a while. In the first few laps the car was still spinning its wheels even in top gear. Driving over the road markings, zebra crossings and the like, were just so greasy. Going into the swimming pool complex, you just had to commit, trust the car and go for it. There were a few times in the race where I thought I’d gone in too hot, but managed to hold on. It was one of the most memorable experiences of my life.

I qualified well, it was a short session and I managed to secure pole position. Into the race itself, I made a good start and broke away. The tow you get in Formula Ford is amazing, you feel that you have got away and managed to break it from the car behind, but as this particular race progressed, the pack gradually started to catch me.

With three laps to go, I was passed on the back straight and dropped down to third. I was kicking myself and thought it was race over. However on the next lap, down the start finish straight I managed to get a big tow and managed to get down the inside over Avon Rise, which put me back up to second. Going into the final corner of the lap, I went to go down the inside but got blocked. Two laps to go. On to the back straight, I managed to get the lead once more but as we came into the last corner of the lap, the guy in second place got down the inside and we crossed the line side by side, rubbing tyres. I lifted and he once more got ahead. Onto the last lap and on the back straight, I get the tow and once again I’m in the lead. Into the final corner, this time I don’t lift and he’s forced to go on the outside, we are touching tyres all the way to the finish line. I kept my foot in, crossed the line and won the race by something like five hundredths of a second.

Our sincere thanks go to @celebkarting and @racedriversinc for making this memory possible. Michael was interviewed whilst participating in the Autosport International Karting Challenge (AIKC), run in association with Race Drivers Inc. and presented by Johnny Herbert.

The AIKC was held in honour of Dan Wheldon, the late IndyCar Champion and double Indianapolis 500 winner, with all proceeds going to the Wheldon family's nominated charity, Alzhiemer`s Society (Registered Charity No. 296645). 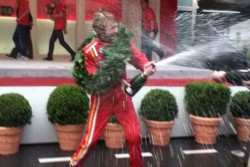