The Formula 1 race that stands out for me is my very first Grand Prix in Brazil. I broke both my ankles very badly in August 1988 and I was still virtually on crutches just before the race. During the weekend I got about on a little motorised bike and I was sort of slotted into the car.

I finished fourth. I think everybody was in many ways quite shocked that I was able to finish at all, never mind fourth place, given the condition that I was in. So for me, it was very special. My first Grand Prix and a fourth place finish. But it was all the hard work I had done to get myself back from the injuries, to get myself fit enough to not just get into a Formula 1 car, but to be able to drive it competitively enough to get that fourth place. It stands out for me by a million miles over my race wins, it was just such a challenge to be able to get into the race seat.

We did okay in qualifying, I managed 12th place on the grid and out qualified my team mate Alessandro Nannini, which didn’t go down to well with the Italian camp, Benetton being an Italian team! It was Flavio Briatore’s first race and clearly he was expecting Alessandro to beat me, so it didn’t exactly go to plan for the team, but I was happy of course. It did though give me my first insight into what was to come in being the second driver in a team managed by Flavio.

When I returned to Benetton for my second spell with the team in 1995, not only was Flavio the team boss, but my team mate was Michael Schumacher. I went there as the number 2 driver and thought I knew what to expect. I knew it was going to be difficult, though I really didn’t appreciate just how difficult it would turn out to be.

Ross Brawn was technical director and at the second Grand Prix of the season, in Argentina, Michael had approached Ross to say he didn’t want me to see any of his data, this message went up to Flavio. I’d been quite competitive in practice and lo and behold the message came down the line that I wasn’t allowed to see Michael’s data. He could see mine, but I couldn’t see his. Michael said to me in the car park on the Thursday night ahead of the weekend, there would be things I’d do with the set up etc of the car that I’d be sure I’d not want him to see and vice versa. The difference being he could still see all my data! I knew that would come, I’d just not expected the situation to arise quite so early in the season. It was an interesting time racing there with Michael, but I don’t have any bad feelings toward Michael whatsoever, the decision was down to Flavio. When I signed he’d promised it would be a level playing field, but of course it wasn’t so it made life all that bit more difficult to be competitive. Despite that, I won two Grand Prix during the season including the British Grand Prix

Winning my first Grand Prix was of course a huge moment for me and to do it at Silverstone. Special because it was my first win, at my home Grand Prix in front of the British fans, who make the race one of the best supported races in the world. With most of the Formula 1 teams still based in the area, it can be considered to be the home of Grand Prix racing. Seeing all the flags waving and the fans cheering, it was very very special.

Leading the race, you could never ever relax and think you had it won. A car always stop, even on the last lap, so you have to keep concentrating right to the line. There is no feeling of ‘job done’. I remember Nigel Mansell making that error just once in Canada, when he went round the hairpin, waved to the crowd and lost revs, which made the engine shut off. So you do just keep on going to the very end.

My third Grand Prix victory came with Stewart Racing. It was always good working with Jackie, he’s an interesting character and he still has a lot of passion for the sport, always wants to be involved, wants to try and help you. Things may have moved on a little since he drove but he still has that passion to help.

We were a small team, up against the might of Ferrari and McLaren. Cosworth produced a good engine and Stewart a good car. It was a good package, Rubens had helped develop the car. It was the ’99 European Grand Prix at the Nurburgring and I made the call when it rained to put the wets on. Ruben’s came in to change back to slicks. I called the tyres right, a very cool call on my part and one that enabled me to go on and win the race, which was the only ever Stewart Racing Grand Prix victory. Jackie’s final victory was at the Nurburgring on the Nordschleife, so it was made it all the more special for the team to win there.

Our sincere thanks go to @celebkarting and @racedriversinc for making this memory possible. Johnny was interviewed whilst participating in the Autosport International Karting Challenge (AIKC), run in association with Race Drivers Inc. and presented by Johnny Herbert. 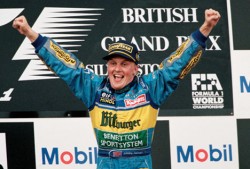