Motorsport has always been in my blood, with my father Keke having been Formula 1 World Champion in 1982.

I have many fond memories of the sport, where I first started out competing seriously in karts in 2000 when I was team mates with Lewis Hamilton.

I progressed quickly through the formulas and in 2006 drove in my first ever F1 race for Williams, the team my father won the World Championship with, which in itself was memorable but was made truly special in that I finished in the top 10 and picked up World Championship points.

In 2010 I signed for the MERCEDES AMG PETRONAS Formula One Team, which Michael Schumacher also joined.

After two seasons developing the car, our hard work paid off earlier this year at the Chinese Grand Prix.

On the Saturday I gained the first pole position of my career.

The car felt perfect and I knew I stood a great chance of victory, taking pole by over half a second!

I felt calm and confident going into Sunday.

We stuck to our race plan and by the time the final pit stops had taken place, victory would be mine as long as I managed the car, kept my concentration and brought the car home.

As I crossed the line and took the chequered flag, the feelings were quite overwhelming.

Standing on the top step of the podium, knowing I had delivered the first GP victory for Mercedes since Fangio in 1955 was so special.

It is my fondest memory of F1 so far. 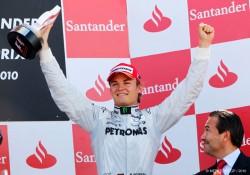