I was probably one of the first people to drive the mini in a race as many people thought a mini would never be a racing car. The thing is that it was very fast around corners and in an 850 you could go the whole way around Brands Hatch flat out, you wouldn’t have to slow down for anything. It performed like a go cart. Being an 850 it wasn’t very fast any way and you could head flat out up the hill to a corner like Druids; you would just go sideways and it would slow it down. I started with that and then joined Coopers and was in the Cooper team for a couple of years and won the British Touring Car Championship in 1961.

After that I joined Ford and won the European Touring Car championship in a Lotus Cortina Mark 1 in 1965 (66). I was then with Carol Shelby with the Daytona Coupes and then the GT40’s.

I did my first ever race on the 9th August 1958. I bought a lotus 6 for three or four hundred pounds and I needed to do six races that year to get my racing licence, which I managed to do. One of the Lotus team members was a guy called Alan Stacey who was a local farmer to me. I met Alan and he said he would really help me get started as I had proved I could drive. He was brilliant at giving me good advice but the most important thing he did was to persuade Colin Chapman to sell me a Lotus Elite prototype. I had Elite chassis number four. All the others who had them were drivers and I was just a beginner but Alan persuaded Colin to sell me the car and he did all the engineering on it.

What happened then was that I did a couple of races in the Elite and I think the third race I did was the big race at Silverstone, the Daily Express race. Colin Chapman was also driving a Lotus Elite in the same race. I had a bloody good race with Colin and a week after that and he called me.

My secretary said there was a chap called Chapman on the phone and being a farmer I thought it was a seed salesman trying to sell me some seed. It was Colin on the phone and he asked me if I would like to drive at Le Mans in two months’ time. So my first race was in August 1958 and there I was down to drive at Le Mans the following June. I drove with Jimmy Clark and we finished second in our class. My dream when I started racing was to drive once at Le Mans and I had achieved that in a ridiculously short space of time; it was an incredible experience.

One funny thing that happened at Le Mans - I was sharing a room with Alan Stacey while Jimmy Clark who I was driving with, was also staying at the same hotel in another room. First evening we arrived we were all together and someone spotted a small piece in a newspaper saying that one of the drivers at Le Mans that year had a wooden leg. Jimmy asked who on earth that could be and Alan, who was there, said ‘oh, that’s me’. Jimmy said, ‘no come on, who can it be?’. Alan said ‘no, it is me’ but Jimmy just didn’t believe him.

At about 8.00am the following morning Jimmy burst into our room and there on the floor was Alan’s leg. Well Jimmy just died; he was so embarrassed that he just fled from the room. I didn’t see him again until lunch time and Jimmy came up to me quietly and asked if Alan was angry with him. I said no, Alan had just laughed his head off.

Sir John shared this memory for the Replay Motorsport project at the www.chelseaautolegends.com show on 3rd September 2012. Our thanks go to Chelsea Autolegends in making this memory possible. 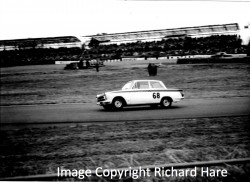 "John Whitmore in a Lotus Cortina which was the ultimate in saloon car racers at the time. The car is white with a lime green flash down the side which was the Lotus trademark. The front nearside wheel has lifted off the ground." Brands Hatch, British Grand Prix, 1964. Click on the image to enlarge 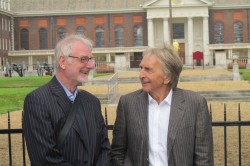