Looking back on my racing experiences so far, there are 2 real stand out moments, both involving the Le Mans 24 hours.

2005 I secured my first drive in the race. It had always been my Dad's dream to race there and it was mine too. My first time out in practice, pulling away from the pit lane, round the kinks and under Dunlop Bridge was quite mind blowing. I was totally overwhelmed.

I'd never raced the car prior to Le Mans, I'd had a test of it at Road Atlanta and got on with it well and was pretty happy with the car.

Heading out through Tetre-rouge and on to the Mulsanne straight, you just think, "I have arrived!" It's just awesome, I really can't put the feeling into words. Maybe if I ever ride at Badminton horse trials I might be able to replicate that feeling, but to this day nothing in racing has come close to that initial feeling.

I could never look back on races however and forget about finishing the 2006 Le Mans 24 hours. Not only did we finish the race but I did the start, which was the most awesome experience of my life.

I've done the start twice now, but that first time was just totally amazing, to come round the Ford Chicane and you just stare at the wall of spectators and you think 'Oh my god I'm at Le Mans and I'm starting!!!!!!"

In that race, I was driving the Intersport Lola B05/40-AER LMP2 car with Clint Field, who I was racing with in the USA at the time and Duncan Dayton.

The race may be 24 hours and in the past, teams and cars maybe took a view of needing to nurse their cars a little and plan how to get them to the end, but nowadays it is absolutely flat out all the time, a 24 hour sprint race. You maybe dial it back just a fraction, to ensure you keep the car on the track, but you are pushing and doing the same lap times in the race as you did in qualifying.

It actually proved to be a really frustrating race for us. We knew we had the pace to be competitive and to secure a podium, but from just the 2nd lap, right through to the end of the race, we had a wastegate problem which just couldn't be fixed.

Despite the frustration, the team did an absolutely fantastic job just to keep the car running and they really did pull out all of the stops to get us to the finish.

As the race wears on, you do have to coach yourself to stay focused, the cool air of the night, which helps the cars go faster, can be offset by a dampening of the track. But drivers do go quicker in general as darkness falls. It is my favourite time to drive there. It's not as dark as it is at Spa-Francorchamps, the light is just right and you can really settle into a rhythm.

In LMP2, you have to be mindful of the massive speeds of the LMP1 cars coming up behind you, but at the same time, we are busy dealing with the much slower cars around us too. The aim is to set consistent lap times and maintain a rhythm.

Night time holds its own challenges, recognising the cars behind by the colour of their headlights. GT cars lights are yellow, LMP cars white. As you tire, one of the hardest aspects is judging the closing speeds of the other cars around you. I mentioned in my commentary on the race this year (2012) that I wished the Audi LMP1's had had the really bright lights when I drove, as they were at least easy to spot and you'd know it wasn't another LMP2 car coming up!

But as the sun rises and a little mist hangs in the air, there is little better feeling in motorsport than to nail a run through the Porsche Curves.

As the final hours of the race wore on, the team continued to work hard on getting the car home. We had to swap from paddle shift to manual as further problems developed, but we eventually found ourselves on the last lap, at which point the worst moment of the whole 24 hours occurred when Clint suffered a huge puncture. To be classified as a finisher, you must cross the line on the final lap and be within a prescribed time of when the leading car crossed it.

Clint got out of the car on the circuit. We all felt like the world was ending around us. Watching Clint on the TV climbing out was just the worst feeling. 24 hours of racing and we were in danger of not finishing.

However, he assessed the damage, climbed back in and absolutely hammered the car over the line driving on just the rim of the wheel. Thankfully it was within the time limits and we got classified as a finisher, ending in 4th place in LMP2

We had a tinge of disappointment of not being on the podium, just a few laps without the technical problems would have seen us on there, but that did not overshadow the massive achievement by the whole team of finishing the race. I am immensely proud of that.

Liz shared this memory for the Replay Motorsport project at the www.chelseaautolegends.com show on 3rd September 2012. Our thanks go to Chelsea Autolegends in making this memory possible and to the British Women Racing Drivers Club www.bwrdc.co.uk who are celebrating 50 years of the club. 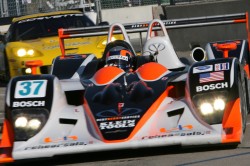