Back in the early 1970's I had a burning ambition to drive in World Championship Formula One. I had started motor racing in early 1965 after working seven days a week to save money to buy my first small race car. having managed to progress through Formula 4, Formula 3 and Formula 5000 with the help of friends and sponsors I achieved my ambition by competing in the United States Grand Prix at Watkins Glen in October 1974.

At the time a Swedish racing driver called Ronnie Peterson was my hero....he was an awesome race driver, his car control and competitiveness was an inspiration to me at the time.

Ronnie was driving for Lotus at the time in the iconic Black and Gold liveried JPS Lotus 72's.

I sadly failed to qualify for a few Grand Prix before Watkins Glen, mainly due to driving an uncompetitive car, well that's my excuse anyway! As I sat on the grid at the Glen just in front of me on the grid was my hero Ronnie Peterson in JPS Lotus 72 chassis number 6. Ronnie had already won the Monaco Grand Prix in this car earlier that year.

It was surreal for me sitting on the grid with some of the Worlds greatest racing drivers including Lauda, Fittipaldi, Hunt, Andretti, Peterson, Pace, Hulme etc.

I was not destined to stay in F1 very long but that day in Watkins Glen will remain one of my all time great memories.

Earlier this year I was contacted by a race team, who had been restoring a Lotus 72 for one of their customers, and asked if I would do an initial shake down test on the newly rebuilt car. I went to the teams workshops for a seat fitting to find that it was chassis number 6 the very car I raced against in 1974.

I was absolutely thrilled that I was going to drive this amazing racing car.

On a cold Wednesday morning I arrived at Mallory Park to find this beautiful racing car being warmed up in the Paddock. Having been strapped in I ventured out on to the circuit, for me it was very a emotional experience to drive this car.

The Cosworth V8 DFV engine singing in my ears was a joy, the car felt absolutely
amazing and I could instantly understand why this car had been so competitive for so long in the 1970's.

All too quickly the test came to an end and the car was loaded into the transporter and taken away.....I was so so lucky to have been given the opportunity to drive this wonderful car and get to that little bit closer to understanding what my hero Ronnie Peterson would have been experiencing all those decades ago.

But Mike, what happened at Watkins Glen in the race? Even if you retired early, we want to know how it felt to race wheel-to-wheel with your heroes.

At the end of the warm up lap we all came round to form up on the grid and as the starter was raising his flag to start the race the Pressure Relief Valve on the DFV fuel injection on my Ensign failed!! This reduced the fuel pressure and as the rest of the grid sped away I was left to struggle round the first lap with next to no RPM! Once I got back to the pit lane it took the mechanics about 4 laps or more to replace the PRV and get me back out. Once back on the circuit I tagged onto Chris Amon in the works BRM P201, we had a fun dice for a while and eventually finished the race. Sadly the time I lost in the pit lane meant that I was not classified in the results :o( What did come out of the race for me was that BRM offered me a drive for the 1975 season, sadly that went very bad, which is another story!! 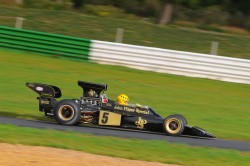 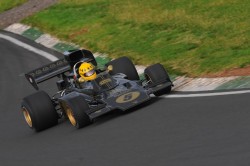