In March 2005 I was approached by Pininfarina, the famous Italian auto design house who asked if I was interested in commissioning a one-off car. Following discussions with them I purchased the last unsold Ferrari Enzo and asked them to design me a modern version of a Ferrari P car, delivering to them my Ferrari 1967 Ferrari 330 P3/4 chassis 0846 as inspiration.

My road going P4/5 was born and publicly revealed on August 18, 2006 at the Pebble Beach Concours d'Elégance. We showed it again at the Paris Motor Show in late September that year.
In 2009, I decided to race a P4/5 in the 2010 24 Hours Nürburgring. The car I envisaged would be called the P4/5 Competizione. I didn't want this to be a conversion of my road car but instead an entirely new car, purpose built for the job. P4/5 Competizione is based on a 430 Scuderia and we built it to FIA GT2 specifications.

Over the last two years we have continued developing the car. It now runs KERS and competes in a special hybrid powered class. Despite the car being 40-50bhp down on power to the German factory cars, we have had some real highlights, the 2012 Nurburgring 24 Hours being top of them.

The press and people nowadays seem fixated on times cars can set on the Nurburgring. The lap we do as part of the 24 hours is very different as we also run on the grand prix circuit, so it is a much longer lap.

Out of curiosity though, I asked our engineers to set up telemetry that would measure the times the car was setting on the parts of the circuit that would give us the full lap of "the 'ring". We did several laps and fed in the data. It turned out we were able to run at 6:51 lap on the 'ring' that people know. To the best of my knowledge, the fastest a Ferrari has gone round there so far is the Ferrari factory's own 599FX which managed a 6:58. It was an interesting comparison and a nice outcome but what made me more proud was to be able to complete the 24 hour race.

During the race, at one of the pit stops the safety on a fuel bottle either jammed or leaked and a splash of fuel went on to the engine which then ignited in a flash. I was stood just near to the car as it ignited. It was very quick and very bright but we have fire extinguishers at the ready during re-fuelling so the fire was out in a matter of seconds. There is a spectacular photo that captured the moment the fire flashed over the car (click pic on top right to view).

Fortunately the fire wasn't in the engine bay as such, but it took us a good 4 minutes to clean up the car from the extinguishers and back out on the circuit. As a precaution we switched off KERS in case there was any damage to the fire protection on any wiring we hadn't spotted.

Next stop we gave the car a thorough check over and all was fine, we switched KERS back on and it performed flawlessly.

One issue we hadn't expected that did crop up was caused by the stunning grip and pace of the P4/5 Competizione. The FIA insist on an inertia kill switch for the KERS system, in case of a crash. The safety is set to be triggered at 3G's.

Going round the famous Carousel on the Nordschleife the car was actually pulling more than 3G and triggered the trip sensor which switched off our KERS!

We went on to finish the race 1st in class and 12th overall. We finished the highest non German car and we were the only alternative energy car to finish.

The FIA made that race part of their Alternative Energy World Championship, so P4/5 Competizione is currently leading the championship.

As far as future plans for the car?

I'd love to see it challenging to take top step of the podium overall, but for that to happen we would need to be able to compete on an even playing field. We are down by 40 - 50 bhp on the German Factory cars. I'm not saying I want us to be given a victory, just the opportunity to at least start with a chance of overall victory.

Hopefully we will be back with P4/5 Competizione next year. 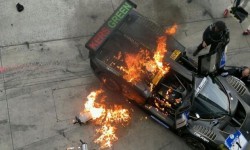 P4/5 Competizione in action at the Nurburgring 24