The year I purchased this car at Pebble Beach I hadn't really planned on buying anything at the Christies' Auction. I'd bought cars for my collection from them previously, but really wasn't there to add to it. However...

I spotted what I felt was a pretty special car, but didn't really know that much about it. It just wasn't attracting any interest from buyers, there was one or two dealers who were bidding but nothing serious. The car was a Ferrari, a very special one at that. Well it was in my eyes anyhow and I felt it was an amazing piece of automotive history.

My interest and passion for the Italian marque had been there from a very young age. I loved mechanical objects as a kid I loved taking them apart to see how they worked. To me the most glorious were cars, way before I ever got to drive them.

As a kid I would trek into New York City and go to the Autoshow and I remember once seeing a Ferrari that had just won Le Mans. I think this was in 1961 and it was displayed out in the lobby. There were still sweat stains in the seats, the car was all dirty and oily and I was just utterly enthralled.

I would ride my bike to Connecticut to a local Ferrari dealers owned by Mr Chinetti, who was the first ever official Ferrari dealership in the United States and who formed the North American Racing Team. Mr Chinetti would let me sit in the cars and actually touch the steering wheels, but not turn them of course.

All those years later, I sat at the auction at Pebble Beach staring at a 1947 Ferrari 159S Spyder Corsa. Otherwise known as Chassis 002. The 3rd Ferrari ever made and the oldest existing Ferrari with continuous history in the world .

The car was driven in 1947 by Raymond Sommer to victory in the Turin Grand Prix. It was the second International Grand Prix of Turin, which was reserved for sports cars and was "the most beautiful race of the year " as reported in the Gazzetta del Popolo newspaper.

It really was a unique piece of history, I didn't know at the time if I would like it, but I figured at the worst, if I bought it I could probably flip out of it easy enough.

The car didn't actually sell, failing to make its reserve price, so the auction house called up the owner and my bid was accepted. I now owned Chassis 002.

The first time I got in it I loved it. I realised there and then that it was totally worth restoring back to its factory condition. So that's what we did.

The best restorations take place over a long period of time. You first get the car running safely, drive it for a while, spot what's working well and what needs improving, start researching its history through photographs, find how it was in its original form.

Any car that is that old has often suffered plenty of abuse and for Chassis 002 that was indeed the case. Over time it had been re-bodied from a Spyder Corsa to a kind of Barchetta by Moto as the guy wanted to use it more as a sports car. It then become kinda derelict before, in the 60's it was put back to being a Spyder Corsa, but not in its totally original form.

I sent the car back over to my friends at Sport Auto in Modena to sort the mechanical elements of the car and then one of the great panel beaters of Modena was brought in. Over a period of 6 years we worked together to gradually bring the car back to its original condition.

These type of cars really are pieces of history, having been driven by great racing drivers. It's kind of amazing to drive and remember in those days racing was very different to today. Racers wore short sleeve T-shirts and a pair of goggles. The car really does feel fragile compared to anything built today.

My P4 /5 Competizione race car is bullet proof compared to it. It has a massive roll bar, can withstand 70,000lbs, it has a full carbon fibre body. You could get into a massive shunt in it and walk away relatively unscathed whereas even a minor shunt in Chassis 002 could easily have proved fatal.

As to how it feels owning and driving such a car?

I think all of these pieces of history are things that really we have an obligation to restore, to bring back to working condition and to use and to show to people. I feel very lucky to be able to do that.

Jim is a film producer and director 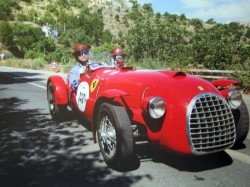