Preparations for the all important qualifying session really couldn’t have been more problematical. In free practice we had difficulties with the gear box which decided I wasn’t going to have 1st gear available. At most circuits that wouldn’t be a great issue but on the tight and twisty circuit of Monaco there are three first gear corners. The team worked flat out to solve fix it, but ultimately I only managed two full laps practice.

Qualifying is everything at Monaco. 16 out of the previous 19 Porsche Cup races held in the principality had been won from pole. Despite this being my home circuit, I didn’t hold out any great expectations, mechanical issues aside, getting a clear run on such a frantically busy track can often be in the lap of the gods. But with 6 minutes remaining I managed to get that opportunity and really hooked up what felt like a really good lap. So it proved to be as I went top of the live timing. Those 6 minutes felt an age as drivers kept pushing and improving their times but eventually the chequered flag went out to end the session and there was my name still at the top.

On Pole Position at Monaco!

It is always a really busy weekend at Monaco as the Porsche Cup series supports the FIA Formula 1 World Championship. There are lots of functions to attend and the whole place tends to be one big party across the week. Saturday night I had a relaxing dinner date with my sponsor and my family. Having competed the previous weekend at the Nurburgring and then spent three days testing during the week I had no problem getting off to sleep.

Monaco really is unique. Drivers have to go to the service area at Fontveille and drive through the streets in full race gear to get to the circuit. We drive past a couple of hotels and a harbour before entering a tunnel that runs under the palace and then out through to the circuit entrance. All felt good with the car and as the start of the race got closer, I began to focus on the task ahead.

Warm up lap – all felt good. The challenge then is hitting your mark on the grid. Visibility in the car isn’t great for this particular aspect and you are on your own trying to judge lining up for your grid box. It’s easy to lose a few metres by pulling up short of the line, but you can’t go beyond it, so there is some pressure there anyway, but the start at Monaco is critical, just to add a bit more to focus the mind!

A clear view down to the first corner. Sainte Devote. Get there first and exit it ahead and history says you will more than likely win. Starts are tricky, getting the balance of the bite point and making sure there is just enough slip to avoid sitting still spinning your wheels as all around you fly past. Starts haven’t always been my strongest point, this one needed to be good.

We were held on the start line for some time, but then the first red light on the comes on, followed by 4 more, a long pause, then they extinguish and it’s the off. I get one of my best starts of the season and immediately pull a couple of car lengths clear. Into the first corner and exit up the hill towards Casino Square with a clear road in front of me.

The race is 16 laps, pushing on I flat spotted my front right on lap 4 and as the race progressed, Kevin Estre and previous winner Rene Rast both began to put me under pressure. Lap 11 and Rene goes off at Sainte Devote with a mechanical failure which leads to him hitting the barriers. The safety car comes out, time to check everything is okay, but also a chance to nurse my tyres and start to plan my restart. Lights go out on the safety car and I time my get away nicely and I’m able to drive reasonably comfortably for the remaining laps.

Round Rascasse for the final time, judge the entry and apex for Anthony Noghes corner by lining up with the cone that is placed on top of the right hand barrier that has been there since ‘DC’ suggested one was needed in his F1 days and then out on to the finish straight, which is more like one long corner. Across the line to victory.

Taking the chequered flag at my home circuit, one of the most famous circuits in the world. It didn’t even hit me till I got to Sainte Devote corner and saw the yellow flags waving that the race victory was mine. Then it hit home and concentration turned to sheer celebration, I shouted a few things I’ll not repeat here, but the feeling was just amazing.

The top 3 cars at Monaco get to drive back to the finish line, opposite the podium, receiving the trophy and hearing the national anthem playing was an incredibly proud moment and one I’ll savour for a long while. Then it was time to ensure the team got suitably soaked with the victory champagne!

It is traditional for winners at Monaco to attend the Prince’s Ball at the Palace on Sunday evening. I really hadn’t expected to win in Monaco and as such had arranged to fly straight to Silverstone to continue preparations for my Le Mans debut by providing some driver coaching for my amateur team partner. I couldn’t cancel so on this occasion had to offer my apologies to the Prince. I’ll keep my diary free next year just in case......

It has been an amazing year already. The season started by winning the Dubai 24 Hours with Team Abu Dhabi by Black Falcon along with Khaled Al Qubaisi, Jeroen Bleekemolen, and Thomas Jager. We set a new distance record of 628 laps (3385 miles) for the race and in doing so we scored the first 24 hour victory for Mercedes since 1989 at Le Mans and the first for the Mercedes SLS AMG GT3, only a year after its debut in the 24 hours of Dubai.

Prior to Monaco I had been involved in some filming with Director Ron Howard, who is making the story of Niki Lauda with a movie called ‘Rush’. For the movie footage I drove the Porsche support car that arrives to assist at Lauda’s infamous accident at the Nordschliefe and also had the honour of driving the F1 car my father, Guy Edwards, drove in that race.

On 15th October 2013 Sean Edwards died in an accident at Queensland Raceway, Australia. Rest in Peace.

Find out more about the Sean Edwards Foundation & #jump4SEF here: 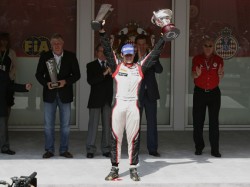 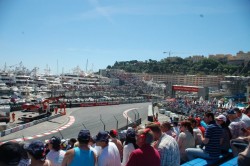