Picking out just one memory of my time in motorsport would literally be impossible. I’ve loved my life, I loved my time in Formula 1, which was the pinnacle of my career, I loved driving sports cars, my time driving for Jaguar at Le Mans and winning with Peugeot. Every part of my life has been a journey and a wonderful experience.

I was very lucky in my early years, I essentially had two fathers. My true father was my best friend, he is the man responsible for making me the person that I am, all the way through my life and career he has supported me in everything I have done and has always been there for me. Of the 150 grand prix I competed in, he probably attended about 130. The other father figure was my uncle. He was in business with my father and had the most unbelievable, outrageous and excitable personality. With five daughters, he enjoyed spending time and lavishing attention on his nephew, so I had both of them almost fighting to spend time with me. My uncle put me in a car when I was just four years old and set me off going round and round in a field until I crashed into something and my father would give him a bollocking for doing so! I couldn’t have asked for a better contrast between the two of them and they enabled me to find a balance and maturity that has stood me in good stead through life.

They both raced on the ovals in Formula 2 superstox and my ambition as I grew up was to join them in running the family business, which I did when I was 17 and to become World Champion in Formula 2 superstox, which I did when I was 19, winning the title at Wimbledon Stadium in 1973. When I look back at those times, I can’t talk of this being ‘my career path’ into Formula 1 as I just couldn’t possibly have even begun to imagine getting from being in a family business making agricultural trailers, to becoming a grand prix driver.

Growing up, my heroes in motorsport were Jochen Rindt, Nicki Lauda, Jackie Stewart, Stirling Moss, Juan Manuel Fangio. I was always more interested in the driver than in the car they were racing. I began building my own cars, welding and fixing them, I’d build the suspension and build my own engines. The mechanical part of motorsport was just another part of me, whereas I was always interested to know why, or how, a great racing driver managed to get the best out of everything. It’s not just by accident that Michael Schumacher won 91 Grand Prix and 7 World Championships. It’s because he was able to get the most out of everything he did.

By the time I’d started competing in Formula Ford I'd realised I’d probably never be a Grand Prix driver, but it would be lovely! I was working from 7am to 7pm, and really couldn’t afford to attend a Grand Prix to watch. There was just no time in the day either, so I’d watch on TV. Who really stands out from that time is James Hunt, I got caught up in the whole Hesketh era, which was just spellbinding.

I think it was through my skills as a businessman, studying how the great drivers performed and through my determination to succeed that I eventually found myself sitting in a Formula 1 car. I tested for Toleman at Goodwood. I’d driven the previous season in Formula 2 for them and they then took me into Formula 1.

My first Grand Prix was at Imola in 1981. Even though I didn’t qualify, it was the proudest moment of my life. It almost brought tears to my eyes because I still maintain today, that driving a Grand Prix car is the most satisfying and rewarding yet hardest, most difficult and often disappointing thing you can do, but for sure it is another level compared to anything else I have ever done in my life. I look back and just loved every single minute I had in Formula 1. Not winning a race was obviously a disappointment, finishing second at the British Grand Prix an obvious highlight, but there isn’t a single race I don’t look back on fondly. I was one of those strange breed of drivers that enjoyed absolutely every aspect of it, whether it was training, talking to the press, speaking with the marshals, testing at a cold damp Paul Ricard circuit or racing in Rio de Janeiro. I enjoyed it all, just being involved and being a racing driver.

To thrive in the world of Formula 1 you have to be single minded, selfish and obviously you have to have natural talent. Determination, guts and a complete focus, 100% concentration on your goal and that is perhaps linked to being selfish. It’s hard to explain but in my view I’m probably the most selfish un-selfish person you’d meet. Selfish in the fact that if I’m doing something that I want to do and committed to doing, you can’t stop me, but when that is done and it’s the weekend and I’m at home, I’m at the beck and call of my family. You do need so many different facets to make up the complete package to survive and thrive in Formula 1. When you look at the great champions, I think they are at another level again, they are even more committed, more focused.

My time competing in sports cars took me to Le Mans. Such a special place and a fantastic race. The very first time I competed was with Jaguar in 1986, which was their big return to Le Mans. On the parade on the Saturday morning, going in front of all the fans, the emotion was so strong. I just couldn’t believe the amount of anticipation, the weight of expectation and support from the British fans was just magnificent. I actually cried, such was the strength of all the emotions.

Winning Le Mans with Peugeot in 1992 was of course a memorable moment, in more ways than one. It was less than a year after my little brother Paul had died and at the time I was really searching for something to dedicate in his memory. The win was made all the more special by something that not many people are aware of.

The French Peugeot team was being run by Frenchman Jean Todt and my teammate was also French, Yannick Dalmas. It was the perfect scenario for the team, to have a French driver cross the line first in a French car.

But with half an hour to go Jean Todt pulled Yannick out of the car and put me in it so I could finish the race. I’d done a lot throughout the race towards getting the car in that winning position and he wanted to reward my effort by allowing me the honour, but he also knew my desire to remember Paul in that very moment of victory.

It was a truly great gesture by Jean and one I will never forget. 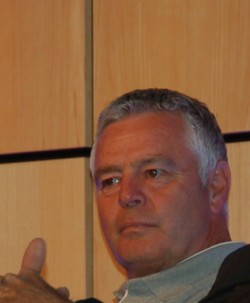